Is it possible to manage all Kali Linux tools from one place?

It is!
There are lots of tools available on the Internet that have some tools bundled together but they are not organized in a good manner and also they have the same tools with different looking interfaces but do the same work.
But Hacktronian seems different from others. It has all the sections that complete a hacker or a student. And each section only has two or four tools and these tools are enough to do jobs. The best thing about HackTronian is that it maintains the list in the cleanest way.
Most of the tools included in the list are the known ones. You may not have to worry about using them.
Let’s get into the tutorial and see how we can configure it on Kali Linux.

Fire up your Kali Linux machine and download/clone HackTronian from Github. Now navigate to the directory where you’ve downloaded it. In our case its root.
cd /root
cd hacktronian
ls

In the hacktronian folder, you will see a shell script named install.sh, run the script and if it doesn’t have the root permission, give it by the command chmod +x install.sh. Note that Hacktronian runs only in root mode. 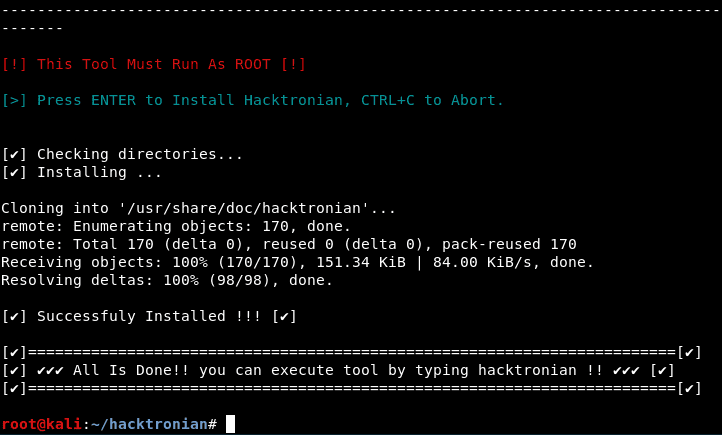 After installing the tool successfully, you can run it by typing ‘hacktronian’ on the terminal. Now you can see the options waiting for you. 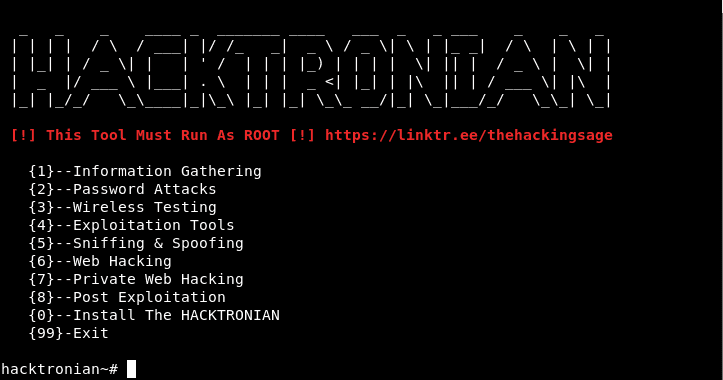 For further tutorials on any section of the tool, feel free to drop a comment below in the comment box below.

Things should be always well organized. That makes them easy to use. Meaningless complexity it not a good option for beginners to go with, especially in the field of Ethical hacking.
What’s your opinion about HackTronian? let us know in the comment box below.